We’re sure Apple had nothing but good intentions when they unveiled their first iPad in 2010. Since then, hundreds of manufacturers have followed suit and tablets have now been integrated into the lives of 1.1 billion people worldwide. In most cases, widespread adoption of a new technology isn’t a problem, but in the case of tablets, it’s a tragedy that most of us remain unaware of. The disruptive technology of tablets has unfortunately now disrupted more than just technology. While the problem isn’t so significant for the occasional tablet user, it’s incredibly significant for anyone who uses their tablet on a daily basis or for more than five minutes at a time. We were sold these $200-700 devices that were meant to enhance our lives but little does everyone know, tablets have been slowly deteriorating the spines, muscles and joints of children, teens, and adults throughout the world. That is, those who can actually stand using their tablet for more than a few minutes. In the end, iPads and tablets often cause more pain and injury than they do enjoyment.

The unspoken problem with iPads and tablets

The problem lies in the way the iPad was designed to be used. A hybrid between a smartphone and a laptop, the concept of a tablet is so convenient that we tend to use them for hours on end in positions that aren’t so great for our health and posture. We’ll hold them on our lap throughout a 7-hour flight, we’ll stream Netflix from them in bed, we’ll sit down with them at the kitchen table to read the morning news – among lots of other common uses. In these common, leisurely positions, tablets tend to cause the most damage on our bodies. This is because when we’re not in “work mode”, we often forget about ergonomics and maintaining a healthy posture. We adopt these seemingly comfortable positions that, in the end, cause us to slouch while forcing our muscles and joints to perform repetitive, strainful movements. Research has shown that when we adopt that slouched position, our head places up to 60 pounds of pressure on the cervical spine, the equivalent of carrying around an 8-year-old child on your back. Not to mention the prevailingly common “tech neck” phenomenon in which avid tablet and smartphone users are suffering from prematurely saggy neck skin in addition to stiff necks and spinal damage. 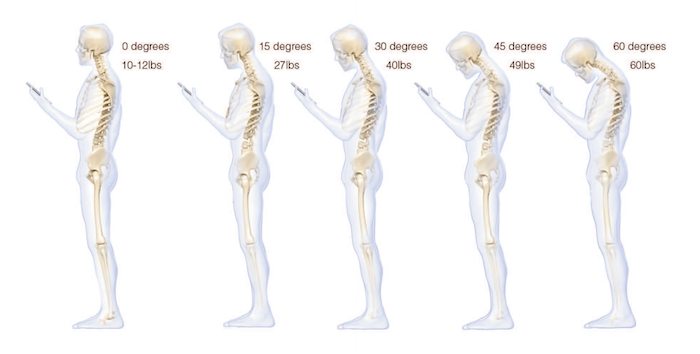 While the same goes for smartphones, we tend to use our tablets for longer periods of time, often without breaks. It doesn’t help that some of us will spend hours of our day periodically staring down at a smartphone to later on fall asleep watching videos on an iPad in an even worse position. That being said, tablets are great for quick Google searches, following recipes and the occasional Facebook binge, but they should not be used as a laptop or desktop PC replacement.

How can you avoid injury when using an iPad or tablet?

The first thing you should do is learn how to use your tablet ergonomically in your most frequented positions. Your first instinct might be to hold your tablet up to eye-level in order to keep your neck and spine straight, but then your arms and hands take the strain. You therefore must therefore focus on keeping your tablet elevated and your body in a neutral position to avoid any kind of strain. Keep reading to find out how you can achieve and maintain a healthy relationship with your tablet.

In order to use an iPad ergonomically, your tablet should first be positioned as close to eye level as possible. Eye-level positioning keeps your body from slouching and your neck and back muscles from straining. Your forearms should be horizontally aligned with your external keyboard (if using one) and your feet should be flat on the ground with your knees slightly below your hips. Your back should be positioned as straight as possible, ideally with a chair for your back to rest on. You’ll know you’re in the right position when your body feels totally relaxed with no muscles being strained. Ideally, you should be using an external keyboard with your iPad whenever possible since typing on a tablet’s built-in keyboard could induce arthritis and Carpel Tunnel down the road. If not, take advantage of voice assistants like Apple’s Siri when typing long phrases or paragraphs. 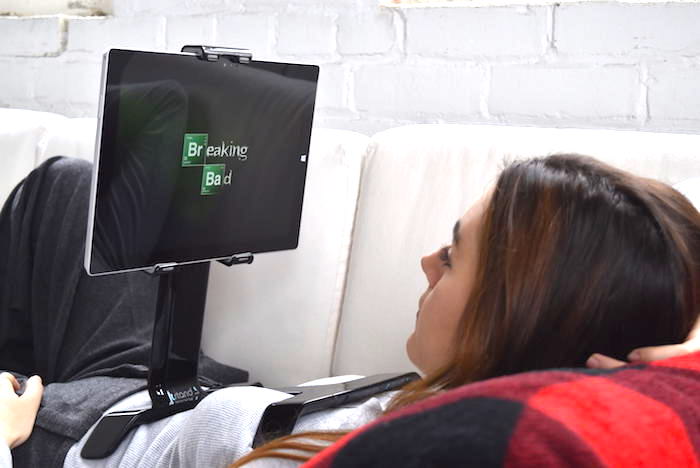 When looking for a tablet stand that can accommodate your tablet uses, it’s important that you choose a stand that sufficiently lifts your tablet, as opposed to the commonly used tablet stands and iPad cases that position the tablet at a more viewable angle without actually elevating the device off of its surface. Non-ergonomic iPad stands will might make your tablet easier to use, however, they won’t make it much safer to use.

This goes for all electronic devices, but due to tablets’ ergonomically poor design, periodic breaks are more important than ever. Without a tablet stand, you should be taking breaks to alleviate your muscles and your eyes from strain. When using an ergonomic iPad stand, such as the Tstand, breaks are still important to reduce eye strain. At night, eye strain can be significantly reduced by utilizing your iPad’s built-in Night Shift mode or by downloading the Android app called Twilight. 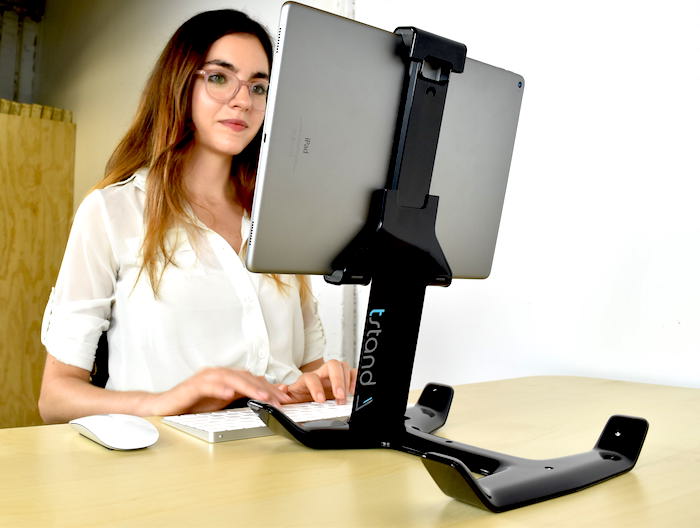 To sum things up, with the widespread adoption of tablets by kids, teens, and adults alike, their health consequences should not be ignored any longer. The health impacts of these devices range from repetitive strain injuries like Carpel Tunnel Syndrome to the chronic aches and pains brought on by joint disorders like arthritis. Luckily, these consequences can be avoided by adopting an ergonomic position when using you tablet, avoiding holding your tablet in your hands for extended periods of time and by committing yourself to taking periodic breaks from your tablet.